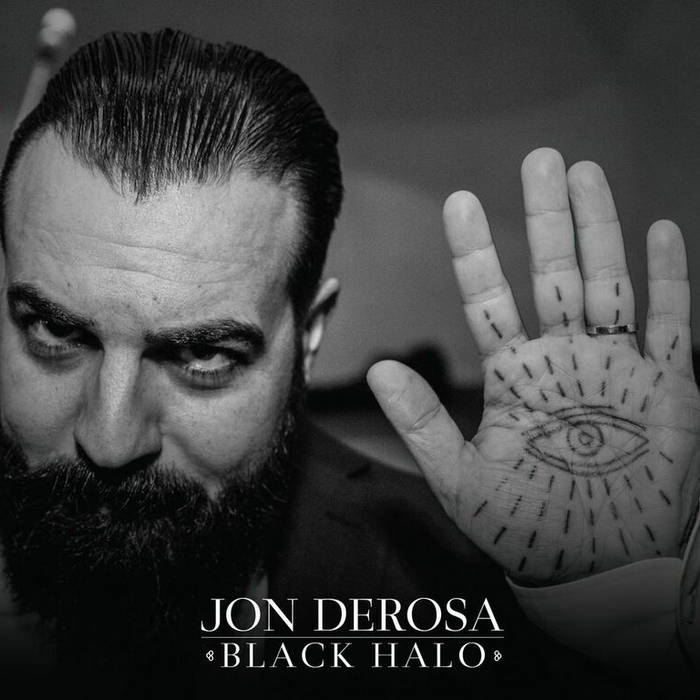 Black Halo the second full-length release from Jon DeRosa, following up 2013's A Wolf In Preacher's Clothes (Rocket Girl). After moving from Brooklyn to Los Angeles in early 2014, DeRosa began frequenting Joshua Tree and other sparsely populated nature destinations in California. His spiritual attraction to and fascination with the solitude and openness of these new landscapes, combined with his penchant for 60's pop songwriting and orchestration, largely inspired the vast "West Coast" sound of Black Halo.

Though the amply bearded, heavily-tattooed DeRosa looks the part of Hells Angel- meets-Source Family member, his striking baritone is more in tune with the Golden Age of crooners, 1950's Nelson Riddle arrangements and 1960's teen love songs. Known for his dreamlike ambient-pop work as Aarktica, DeRosa integrates those signature otherworldly elements into the songs on Black Halo, combining a certain kind of occult mysticism with a refined orchestral sound. His ability to successfully blend such disparate elements is what makes his music so strikingly original and DeRosa such a singular character. But then again, this is the kind of thing that can happen when your past includes studying under minimalist pioneer La Monte Young, making records with Alan Sparhawk of Low, collaborating with Stephin Merritt, and touring Europe with Lydia Lunch.

For the recording of Black Halo DeRosa returned to Brooklyn to work with his musicians and long time collaborator and producer Charles Newman (The Magnetic Fields, Soko, Gospel Music). The two returned to Los Angeles for further tracking and vocals, and to work with multi-instrumentalist Brad Gordon (The Weepies, Dan Wilson) on the orchestral arrangements (Brad also co-wrote "Blood Moon" with DeRosa). The record features vocal contributions from the exquisite Carina Round (Early Winters/Puscifer), as well as the DeRosa/Round co-written duet "Dancing In A Dream." Finally, a most notable collaboration comes in the shape of "When Daddy Took The Treehouse Down," which DeRosa co-wrote with the inimitable Stephin Merritt (The Magnetic Fields).

"Just wipes the floor with you, one minute cutting you dead to the quick and then the next lifting you to peaks where your stilled with an I can do anything renewed self-assurance. A master class in vintage song craft..." - Losing Today

"Jon DeRosa is a huge talent and I'm really wondering where this record, that is completely out of the space and time continuum of 2015 of course, will take him. I know where it has taken me. This is a five start record." - WoNoBloG

"[Coyotes], while slowly swirling, exemplifies his smooth baritone and builds up in a patient-yet-huge way." - Magnet Magazine

"...a romantic teen-beat shangri-la that evokes scenes of open-air cinemas, wind-ravaged dustbowl towns and the obligatory convertible driving into the distance, complete with desired partner cooing into the driver's ear, soda in one hand, gun in the other." - Flipside Reviews

“….the first single off of Black Halo reminds us of how masterfully DeRosa can take unexpected and beautiful melodic turns with his earthy, baritone voice.” - BlackBook

Bandcamp Daily  your guide to the world of Bandcamp

Guest hosted by Tamar Osbourn aka Collocutor and Toshio Matsuura.